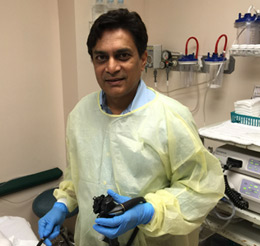 To perform the procedure, a doctor inserts a viewing instrument (anoscope) into the anus. The hemorrhoid is grasped with an instrument, and a device places a rubber band around the base of the hemorrhoid. The hemorrhoid then shrinks and dies and, in about a week, falls off.

After the procedure, you may feel pain and have a sensation of fullness in the lower abdomen. Or you may feel as if you need to have a bowel movement.

Treatment is limited to 1 to 2 hemorrhoids at a time if done in the doctor's office.

What To Expect After Treatment

People respond differently to this procedure. Some are able to return to regular activities (but avoid heavy lifting) almost immediately.
- Pain is likely for 24 to 48 hours after rubber band ligation. You may use acetaminophen (for example, Tylenol) and sit in a shallow tub of warm water (sitz bath) for 15 minutes at a time to relieve discomfort.
- To reduce the risk of bleeding, avoid taking aspirin and other nonsteroidal anti-inflammatory drugs (NSAIDs) for 4 to 5 days both before and after rubber band ligation.
- Bleeding may occur a few days after surgery, when the hemorrhoid falls off. Bleeding is usually slight and stops by itself.

Doctors recommend that you take stool softeners containing fiber and drink more fluids to ensure smooth bowel movements. Straining during bowel movements can cause hemorrhoids to come back.

Why It Is Done

Rubber band ligation is the most widely used treatment for internal hemorrhoids. If symptoms persist after three or four treatments, surgery may be considered.


How Well It Works